Did I witness an ISS Near Miss?

Is it possible that my brother and I simultaneously witnessed a potentially deadly close approach of the International Space Station from the ground? It’s not clear, but it has been interesting putting together the evidence.

I live north-northwest of Seattle, WA. in Friday Harbor, on San Juan Island (in the US). On Sunday the 28th of August, I saw an ISS pass from my house that started at 21:02 Local (Aug 29 2013 4:02 UTC). Prior to the beginning of the pass, I had called my brother who lives down in Seattle (about 65 miles as the crow flies). He hadn’t seen an ISS pass before, and this one looked to be pretty bright (-3.5 mag, according to the Heavens Above website). He called me on his cell phone during the pass, and we talked as we watched it. Near the end of the pass, I saw another satellite come from the north, and appear to run right through the ISS. My brother noted the same thing to me on the phone, wondering out loud if “someone is trying to shoot it down”. He was joking, but that is what it looked like from our different vantage points.

Later I relayed this event to Astrogator John, and he noted that the geometry necessary for both my brother and me to see this required a very close pass of this object to ISS. Thus, I decided to look a little closer at this event. First I went back to Heavens Above and checked out satellite passes visible from my house that night brighter than about 3.5 magnitude. I got the following list: 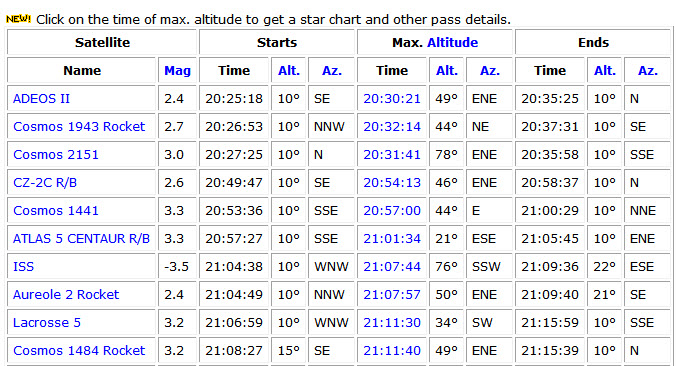 You can see from the list that the other object had to be the “Aureole 2 Rocket”, just based on timing alone.

Heavens Above gives great images for the satellite passes with the background stars, and the following 2 images verify the geometry we observed. First the ISS Geometry: 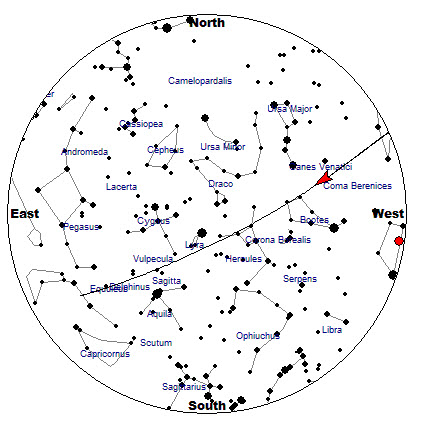 Then the rocket body pass: 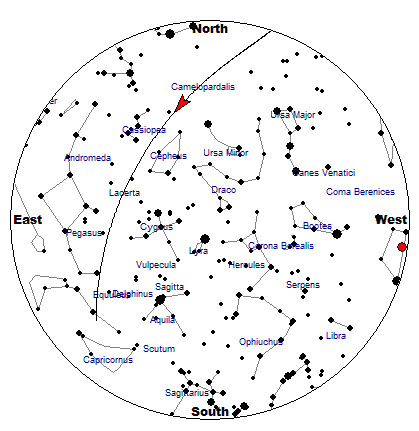 You can see that the paths cross. That’s pretty cool, so I figured I’d dig in deeper here and download the TLEs (two line elements) for these objects and check out the geometry in STK (Satellite Tool Kit, made by Analytical Graphics Inc.). Being the orbit guy that I am, I had to see this in 3-D. The 3-D geometry of the event looks like this: 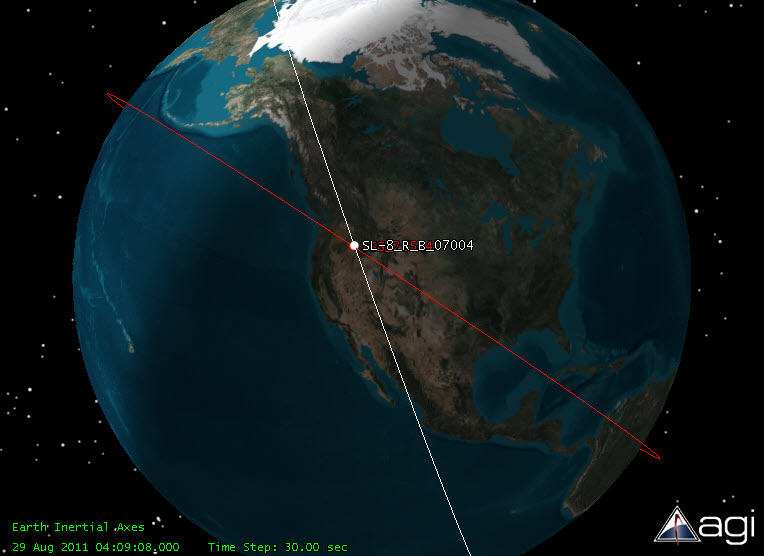 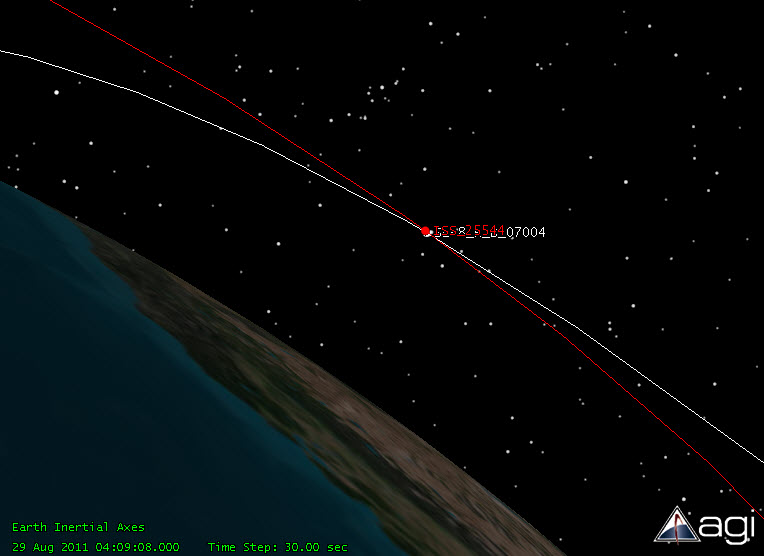 So just eyeballing things here, these objects look really close. Of course STK can tell me exactly how close, so I did a quick access report (az, el, range from ISS to the rocket body) and got this:

And wow, we show a range of 2.75 km? That seems awful close to me. Of course TLEs are not that precise, but 2.75 km seems too close for comfort to me. I’ve seen the station maneuvered in the past for close approaches I thought were further away than this. I understand that collision avoidance folks care about miss distance more in certain directions than others, so I need to provide RIC distances to make them happy. So here you go guys:

Just to check my math, I contacted T.S. Kelso. TS runs Celestrak, and also works for the Center for Space Standards and Innovation in Colorado Springs. He said that their satellite conjunction software called “SOCRATES” showed “..a predicted close approach of 2.310 km between SSC 07004 and the ISS … at 0409 UTC on Aug 29.”

I’m not sure what to make of this, but it sure was cool to see it. I’ve heard of close approaches, but never heard of someone seeing one. I’d love to hear from anyone who knows how ISS deals with these kinds of events.

I will see if I get comments on twitter, I have the comments turned off here for now (too much spam), but I’ll post any responses I get from twitter (@astrogator_mike) or to my email address loucks at see dot com.