Here’s a quick LADEE update for Sept. 22, 2013.  The LADEE team performed a second Perigee maneuver yesterday (21 Sep. 2013, 11:53 UTC) to raise LADEE’s orbit to have a period of 10 days, and to set up the spacecraft for Lunar capture on Oct. 6.  LADEE’s path to this point is shown in dotted lines, while the upcoming trajectory is shown as solid.  Note that LADEE is now in phasing loop 3, and will continue around a full orbit that will conclude on October 1st.   LADEE will then begin the final portion of its trajectory, the 5 day trip to the Moon which concludes on Oct 6 with Lunar Orbit Insertion burn LOI-1.  No further deterministic maneuvers are required (only a small TCM to correct out statistical errors from PM2) before the LOI phase begins.  So even though LADEE has a full Earth orbit left, it is Moon-bound.  LADEE is still in an elliptical orbit of the Earth, but at the next apogee LADEE will encounter the Moon. 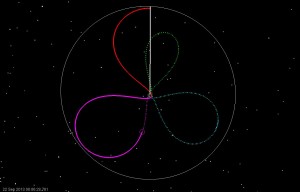 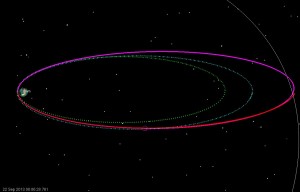