Our Chinese colleagues launched a lander to the Moon on December first, but unfortunately they have chosen not to publicly share where their spacecraft is.  A few days ago there were several TLEs in Spacetrack associated with the Chang’e 3 launch, all of which didn’t appear to be associated with it at first glance (wrong plane, etc.) .  So, given we don’t have any real ephemeris available, let’s see if we can create a reasonable guess on our own with a bit of Astrodynamics detective work.

First, let’s start off with some information we do know from their live broadcast.

We know the launch site is the LC2 Launch Complex at the Xichang Satellite Launch Center (XSLC).  I have 28.2455 deg N Latitude, and 102.027 E Longitude for that site.

Next question is, what direction do they launch, and to what altitude?

Robert did a lot of our work for us by nailing the separation events, and approximate latitude and longitude positions of events based on the video stream.  It may seem rough to try to calculate a trajectory from this information, but actually it tells us quite a bit.  We know the launch site, and we know the approximate perigee altitude of the transfer trajectory (~210 km) .  We also have a pretty good idea of the TLI time: 6 Dec 2013 09:30 UTC from a tweet by Robert Christie (@Zarya_Info) and we know the landing site from the same source.  So let’s make a few simplifications:

Impulsive maneuvers.  I’m going to use these for TLI and LOI for now, just because I’m lazy and don’t feel like digging out the parameters of the spacecraft (and it makes my setup a bit more complicated).

From Robert’s link about, I can eyeball the center of TLI at about 17:45:36 UTC on Dec 1, 2013.  That’s where I’m going to put my TLI.  I don’t know the exact launch azimuth they flew, so I’m going to guess 97.5 and then let it float a bit (i.e. use the burnout Lat, Lon and Alt as controls).  I don’t know their exact burnout altitude, so I’m going to guess 210.  Normally I’d know all of this stuff exactly.  If I were planning the mission (as I did on LADEE) I knew my launch site, azimuth etc. and the exact burnout state of the Mintoaur V.  I could figure out from this what my launch time ought to be, and when TLI was etc.  In this case, I’m having to guess things from parameters I DO know. It’s  detective work, but my peers in China have to work with the same physics and math as me, so it’s going to be pretty close.

So I have to fix the launch time and the TLI time, let the burnout conditions float a bit for my controls, and then vary my TLI Delta-V to hit an LOI at the proper time and get into the proper orbit (I’m going to use a 100 km altitude, 90 deg inclination orbit).

So what does that give us?

First off, it makes our launch ground track look like this: 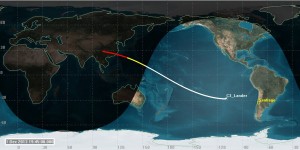 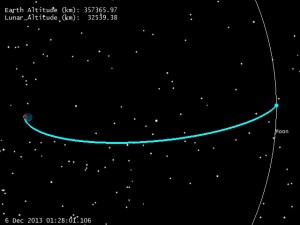 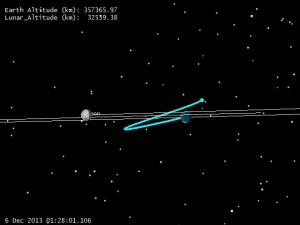 This gives us a good idea where C-3 is now, but what does the rest of the trajectory look like?  First let’s look at the LOI geometry. 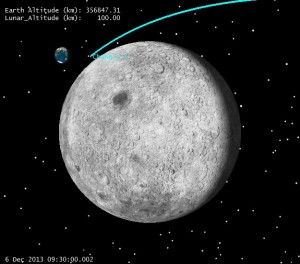 Note that with a 5 day transfer(4.8 really, 116 hrs) the approach to the Moon comes from the side, with respect to the Earth.  This is a nice geometry for visibility at LOI, especially for a polar orbit, because it lets the LOI burn happen in full view of the ground.   With equatorial spacecraft (LADEE) getting the LOI in view of the Earth can require a bit more work.  It’s not a great geometry for watching the maneuver, given that there won’t be much radial-rate component, but it’ll do.

Now let’s take a closer look at the Earth to see what is visible. 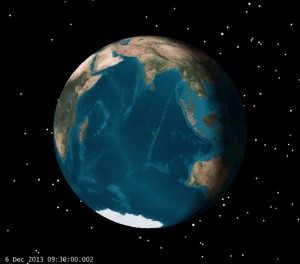 View of Earth from Moon at LOI (click to zoom)

Without digging up the locations of the ground stations, it’s pretty clear that major portions of China are visible, as is Australia.  Since we know Chang’e 3 is using some ESA stations, this is set up for a multiple ground stations to see LOI.  Nice geometry for Orbit determination and real-time tracking of the event.

After one rev in Lunar orbit, we can see what the orbit looks like here: 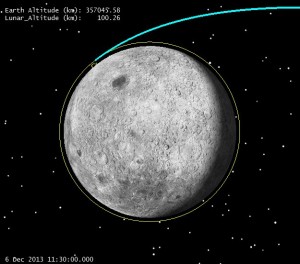 The next question is, how does this set us up for landing?  We have approximated the landing site at the Sinus Iridum region, with a Lunar Latitude of 43 deg N, and a Lunar Longitude of 31 Deg W.  Note the lighting of that site at LOI: 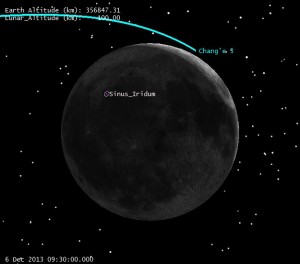 Let’s look at the first day’s worth of ground tracks on the Moon, which will help us see what we’re waiting for, both in terms of lighting and geometry: 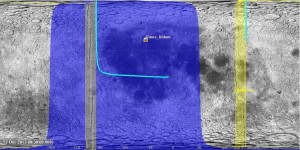 Note that the light blue line shows the incoming trajectory and the subsequent lines show the progression of ground tracks (which move from right to left).  Further note that part of our ground track is in shadow (blue) as is the landing site, and part is in sunlight.  Obviously, for landing we’d like sunlight both on the site and on our ground track.  Here are the tracks a day later: 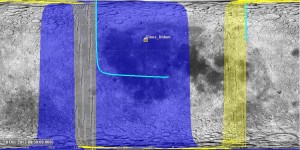 Our sunlit ground track on the right is moving closer to the landing site, and the shadow is drifting in the right direction as well.  The trick here is to just wait in orbit while the Moon rotates under us.  Looking at this in 3D gives a better geometrical perspective: 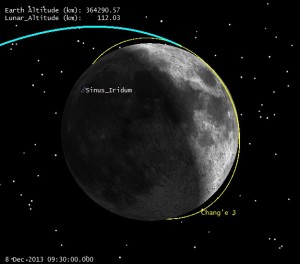 The orbit is pretty much fixed in inertial space, and we just have to wait while the Moon rotates.  If we wait until Dec 15th we get this: 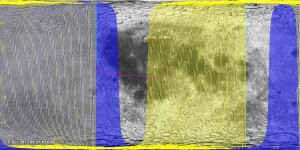 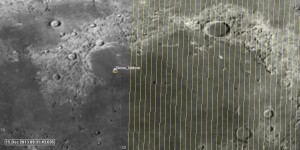 At this point we’ve all but gotten lined up with the landing site, and it’s time to start the descent.  Now we have to do a bit of guessing.  We know that the descent profile goes from a 100 km circular orbit to a 100 x 15 km orbit (altitudes).  We know that the vehicle lowers to periselene and then lowers from there.  We’re going to assume that we won’t go a full rev in the 100 x 15 km orbit, but will instead just execute one half rev and descend.  If so, it looks like this: 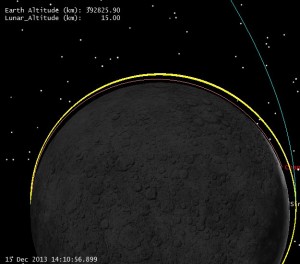 It’s hard to show on this scale, but if you zoom and look closely at the left, you can see the orbit starts at 100 km (yellow) and then descends to 15 km on the right.  Let’s look from the landing site perspective.  Note we can see the approach hyperbola still (blue) the 100 km parking orbit (yellow) and the spacecraft at Periapsis just peeking over the limb at the top.  You can see that the parking orbit isn’t completely locked inertially, it’s got a bit of drift in it from the Lunar gravity field. 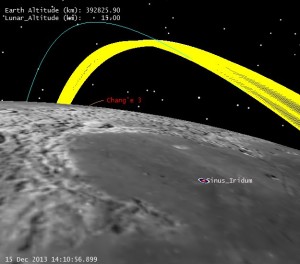 Descent to Periapsis from Landing Site (click to zoom)

Now I have to really fake it.  According to the superb site Spaceflight101, the landing engine actively throttles all the way down:

While I can model an engine that throttles, it’s way too much work (if I was working on the mission, I’d have the lander controls people do this) so I’m going to fake it with 2 constant thrust finite burns and a coast segment.  I won’t bother trying to get masses and engine masses right either, I just want to show the basic idea: 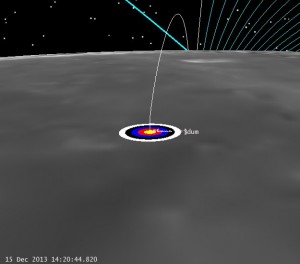 Of course the real profile won’t be exactly like this, but this is a reasonable facsimile.  Let’s check out the geometry with respect to the Earth: 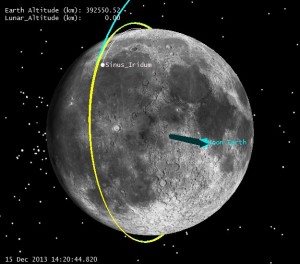 And finally let’s see what’s visible from Earth at the landing time: 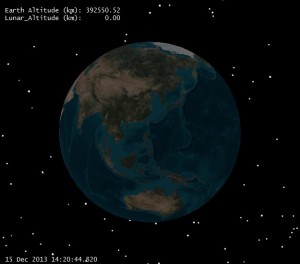 View of Earth from Moon at Landing time

Which looks pretty darn good if you want to get coverage from Chinese ground stations.  (Note: I lit the Earth up a bit in this picture to show what was visible, but this half of the Earth is in darkness at the landing.)

Pretty fun stuff.  We welcome any updates, if anyone has better data than we do, it’s real easy to change the assumptions and re-run.