Could the Meteorite crater in Nicaragua be related to Asteroid 2014 RC?

On CNN.com there was a story “Meteorite makes big crater in Nicaragua” by Amanda Barnett.  In the article, Amanda wrote: ‘AP quoted government spokeswoman Rosario Murillo as saying they’ve determined it was a “relatively small” meteorite that “appears to have come off an asteroid that was passing close to Earth.”‘  Well, that’s enough to get someone wondering if indeed it could have come off 2014 RC, which just did the flyby this past Sunday, 7 Sep 2014 at 18:15 UTC.

Well, Adam Gorski at Analytical Graphics made this easy by posting an STK scenario on AGI’s website blog:  Asteroid 2014 RC flyby on Sunday.  Adam got 2014 RC’s ephemeris from the JPL Horizons website, and set everything up.  THANK YOU ADAM!

In Amanda’s article, she says “The Nicaragua Dispatch said the hole is in the woods near Managua’s Sandino International Airport and about 1,000 feet (300 meters) from the Camino Real Hotel” which, according to Google Maps is at Latitude 12.148060, Longitude -86.184949.  So, I put this into STK as a place object.

Amanda also mentions the time of impact, which is critical to this: “The Today Nicaragua site reported the crater was found after a loud blast about 11:05 p.m. on Saturday. ”  Nicaragua is in the Central Time Zone, and from a few web searches seems that they do not use daylight savings time.  So the time should be UTC – 6 hours.  So, 11:05 pm on Saturday would be 7 Sep 2014 05:05 UTC.

So, with the location and the time, we can see if the Hotel was on the side of the Earth from which the asteroid was coming from: 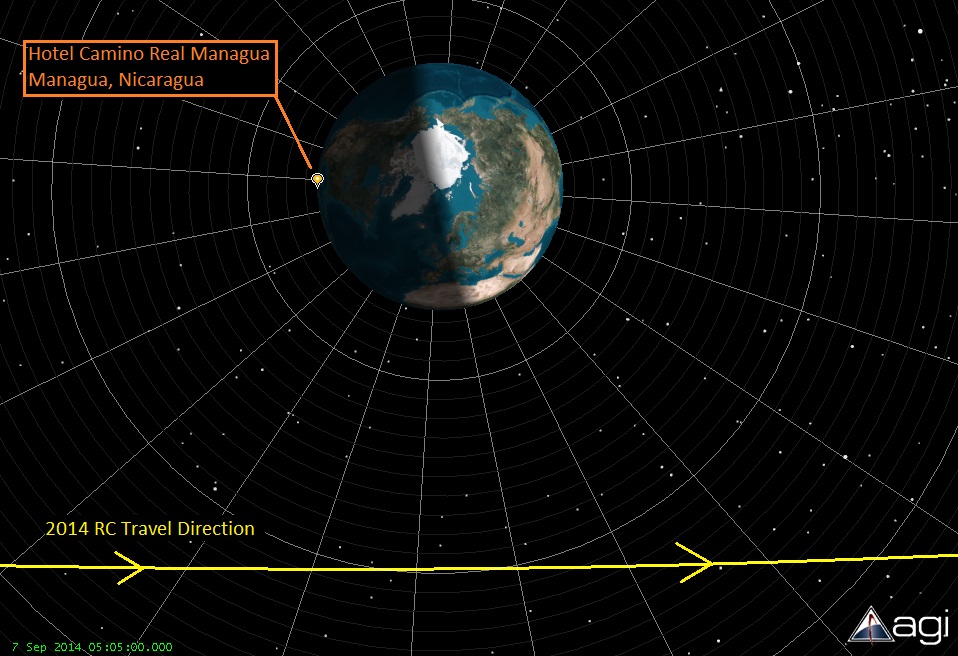 So, that seems pretty obvious.  (Even if the time is off by an hour or so, it’s still on the correct side of Earth.)  In this STK view, asteroid 2014 RC is traveling from left-to-right, and the hotel near which the crater was found is on the same side of the Earth.  So far this myth is NOT busted; it’s plausible.

So the direction seems reasonable, but we want to see if it’s reasonable that this meteorite could have come off of asteroid 2014 RC.  We can use a similar approach that several us did a few years ago investigating a potential space debris collision, as written in the paper “INVESTIGATING ORBITAL DEBRIS EVENTS USING NUMERICAL METHODS WITH FULL FORCE MODEL ORBIT PROPAGATION.” (by Timothy Carrico, John Carrico, Lisa Policastri, Mike Loucks, AAS 08-126.)  We can see if a reasonable force applied in the past could have knocked a rock off of 2014 RC, or perhaps another impact caused a chunk to be thrown off.

We can model this in STK/Astrogator by getting an initial state for 2014 RC in the past, and calculate what delta-V (change in velocity) would be needed to divert from 2014 RC’s trajectory to hit near the hotel at the observed time.  Not knowing when the meteorite could have left its host, I chose to investigate the case if the rock left the asteroid 10 years ago.  So, using our favorite “Follow Segment” in Astrogator, I propagated the initial state of the Asteroid that Adam had found backwards in time for ten years.  Then I modeled a small impulsive delta-V, and set up the Astrogator targeter to calculate the delta-V needed to hit the hotel at the specific time.  I set up the targeter to hit Earth B-Plane values of B dot T = 0.0, and B dot R = 0.0 (hitting the Earth right in the middle, as seen from the approaching asteroid).  And when that profile converged, the next targeting profile targeted the exact latitude and longitude of the hotel. 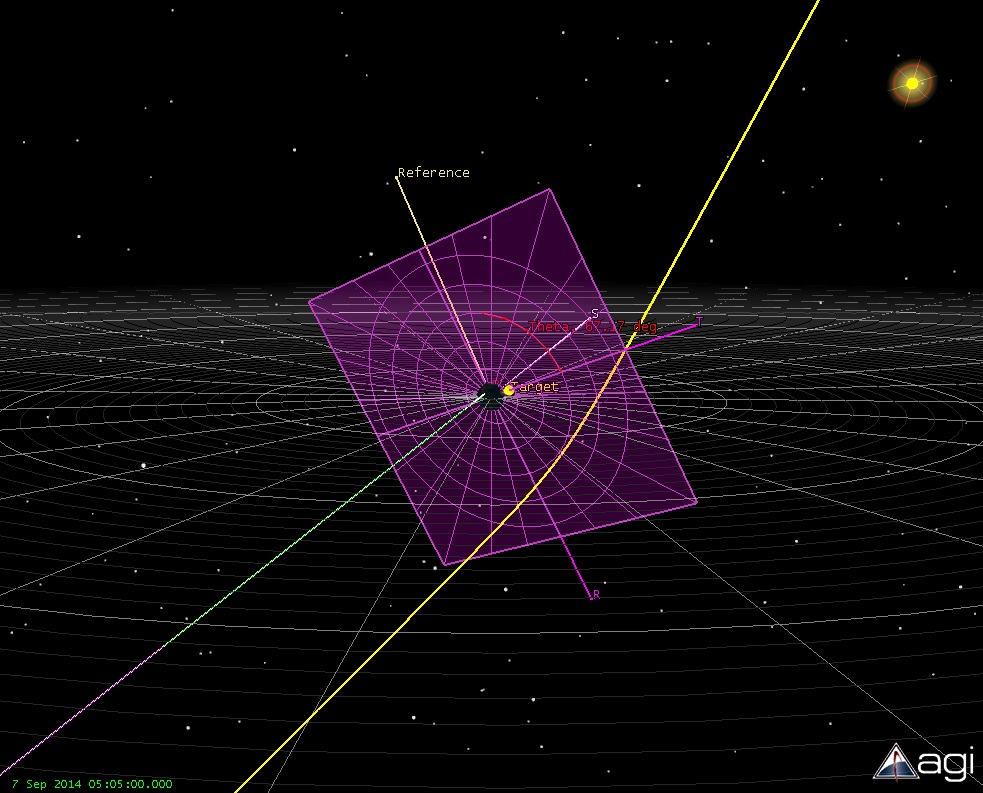 The B-Plane at the Earth as defined by the incoming meteorite trajectory.

This converged pretty quickly, and gave a delta-V number of about 90 meters/second.  Since an impact velocity of an asteroid could be 10 or more km/second, this low value seemed very reasonable.  And, if the rock had come off a hundred, or several thousand years ago, it would take even less delta-V to hit near the hotel.  So, once again, the myth is NOT busted, and it’s very plausible that this meteorite came off of asteroid 2014 RC as some point in the past. 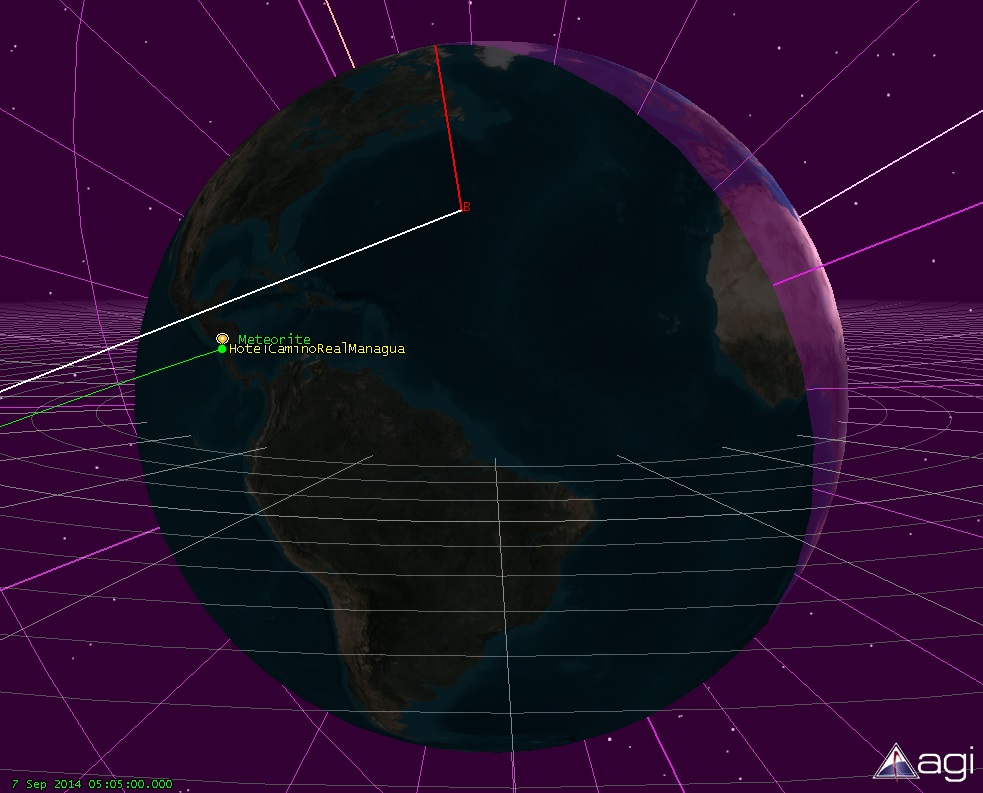 Close up view of the meteorite trajector impacting near the hotel